From the Glee Club to The GhostLight

Paul Mow found fame in NYC, now he inspires the next generation in SW Michigan

BENTON HARBOR — Growing up in Coloma, Paul Mow didn’t think of the performing arts as a possible career option.

“I was always pretty understanding of the fact that the only things available to me living in Southwest Michigan to be successful were to be a doctor, lawyer or a teacher,” he said.

But have a career in the performing arts he did.

Mow, now 47, is an award-winning opera singer, a voice teacher, director, producer and, most recently, co-founder and artistic director of The GhostLight Theatre in Benton Harbor.

His journey began when he attended the University of Michigan and ended with a dual degree in political science and communications.

“But I never wanted to let go of my singing,” he said. “It was the one thing that drove me and got me out of bed.”

All four years of college he was in the men’s Glee Club. He said he got more and more solos, but he barely read music, it was just extracurricular.

Just before he was about to graduate in 1996, he was singing with the club in South America. While in Lima, Peru, he was asked to sing Beethoven’s Ninth Symphony.

“I had a guy run up to me at a party and say he lost a tenor and wanted me to come back to Peru in a month to sing the tenor solo,” Mow said. “With a drink in my hand, I laughed in his face.”

He went back to Ann Arbor and it just “hit him like a ton of bricks.”

He was supposed to work an unpaid internship in Chicago on “The Oprah Winfrey Show,” but realized he could either work his way up slowly in TV or seriously focus on music for the first time.

So he started working on another bachelor’s degree at Michigan, this time in music, which he obtained in 1999.

In 2000, he was at the Glitter Glass Opera in upstate New York performing in an operetta called “The Glass Blowers.”

“That production got picked up and taken to the New York City Opera the next year,” Mow said. “And the director said, because it’s very stylized, he didn’t want to do it unless he could have every one of the performers. There was my New York City Opera debut.”

He moved to New York City five days after 9/11.

“I drove across the George Washington Bridge with $600 in my pocket and a contract,” Mow said. “A lot of people were deciding right after 9/11 that they didn’t want to live in New York and they were afraid, but I’ll never forget the sense of calm and happiness: like it was my time and the one thing I could bring to them was this reckless joy and hope and optimism from the Midwest. I didn’t know what to expect when I got there. I just felt like I was supposed to be there.”

He spent five years at the New York City Opera, gaining notoriety in the opera world, winning competitions and getting his lead role debut in “Of Mice and Men.”

“I won the George London Award, which is one of the most prestigious awards for opera singers,” Mow said. “So by 32 years old I made it, and I didn’t have to look over my shoulder and think, ‘Am I as good a singer as that guy? Or am I going to level up?’” During the summers in NYC, he would come home to help with Children’s Music Workshop (CMW).

In 2007, he decided not to go back to New York, but to go to grad school at the University of Illinois Urbana-Champaign.

Early in that time, he met Ken Ankley, who owned the building where The GhostLight now sits. He heavily suggested to Mow he should open a black box theater there.

“It never occurred to me that I would run an organization, and I think that comes from that whole community feel,” he said. “I’ve got plenty of ego, but it’s so easy to say, ‘Your theater looks great Paul,’ or ‘Paul Mow’s dream is coming true.’ I’ve never ever thought about that. I’ve just thought, couldn’t the Arts District have a different level of community if there was an additional performance venue here?”

It took him his entire time working in Southwest Michigan to assemble the right team to get it done over the last two years. Marty Hess serves as the executive director, Jason George is volunteering to do lights and sound, and George’s wife, Meredith, is running the box office, just to name a few.

“It’s like a red rover,” he said. “It’s an arm-in-arm thing where people are diving in and saying, ‘How can we help? And we think this could be a socio-economic boon to our community.’” Though the theater has had some expected growing pains, it opened with its inaugural show, “Bridges of Madison County,” in June.

Figuring out how to balance his current part-time work at LMC, private voice lessons and growing The GhostLight, is something Mow is still figuring out. But he hopes the shower installed at the new theater will help.

When he isn’t working, he’s spending time with his wife, Lauren, who works at SMC, and their two dogs.

“We’re teachers in our own right, even though we don’t have any children,” he said. “It’s nice to work with students all day and come home to the dogs and watch ‘Game of Thrones.’” He loves sports, and his favorite musical is “Les Miserables,” though he hasn’t directed a full staged version of it yet. His favorite opera is “Carmen.”

Mow said he loves the French shows because he took seven years of French, though he doesn’t get to use it much in Southwest Michigan.

What he does get to use is his music training to teach the area’s youth.

“My parents were teachers. I always shunned that and said it was boring,” Mow said. “But it’s totally in my blood, and I love it. As much as (The GhostLight) is exciting, I love teaching voice more than anything. How many people wake up every morning and say, I know what I can do well and I love to do that well, and I’m going to do it? Not many. I’m really blessed.”

Mow never did go back to Peru to sing Beethoven’s Ninth, but he has traveled the world and played the role four or five times now, including at Carnegie Hall.

“That guy,” Mow said, “was telling the future in his own way.” 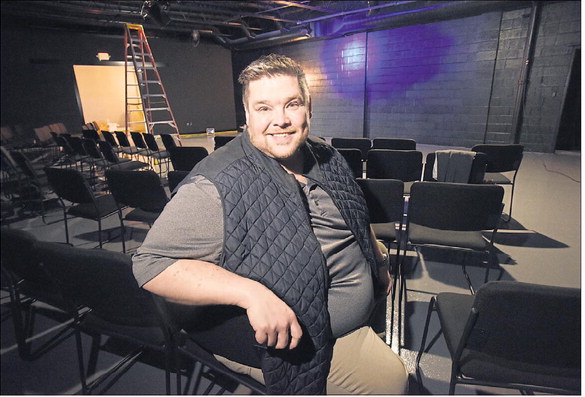 Paul Mow is artistic director at The Ghostlight Theatre in downtown Benton Harbor.

Click here to see this page in the eEdition: